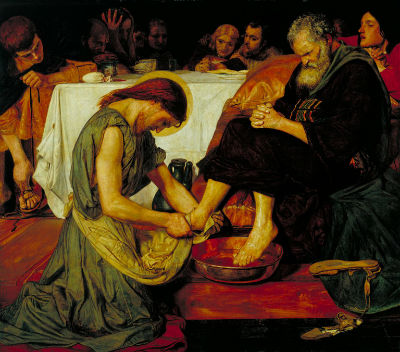 It made me think about washing hands – so much in our consciousness at the moment. We had gone away in the modern world from messages about washing our hands with soap and water, and ‘coughs and sneezes spread diseases’ – soap and water seemed so old-fashioned and children were often not taught the basics to remember as I was.  But now it is sobering to remember our lives depend on someone washing their hands properly.  We wash our hands to get rid of all impurities, to be released from those things that would make us sick.

The world has seemed to move away from the idea that Jesus died to cleanse us too (partly because the idea of sacrifice doesn’t seem to have relevance to modern life).  But the words have come back to me of a chorus we used to sing in Sunday school: ‘he will wash away my sin, let his little child come in’ (from ‘Yes, Jesus loves me’).  Jesus died that we might be freed from all that can harm us.  Washing is vital, and washing our hands is very necessary in terms of cleansing.

But ‘washing our hands of someone’ as Pilate tried to do, is not helpful.  Every time people have crowded into supermarkets with an attitude that Pilate had – themselves to be considered first - it is crushing of all true values.  Pilate was determined to stay Governor and keep himself safe and out of controversy.  He needed the religious leaders to support him, not stir up resentment against him.  He thought washing his hands of Jesus would keep him safely in power.  But now for two millennia we remember him for being too concerned for himself and not taking a stand.  ‘He was crucified under Pontius Pilate’.  What a way to be remembered!  In contrast to those who put themselves first, I know of selfless acts – for example, someone who has isolated themselves from family members in order to continue working with the foodbank with the most vulnerable in society.

Before Jesus came before Pilate on Maundy Thursday he washed his disciples’ feet.  That was the task of the lowliest servant.  Exposed feet going through a dusty landscape in Jesus’ day got very dirty and it was the act of the host to provide servants to make people comfortable and wash their feet.  Though he was their Lord and host, and Peter protested he shouldn’t wash their feet, Jesus got down, and with compassion washed those feet – more soiled than hands, which you could wash yourselves.  As an example of washing to aid others this is the example we need…

Kneels at the feet of his friends,

Master who acts as a slave to them.

Jesu, Jesu, fill us with your love,

show us how to serve the neighbours we have from you.     (Singing the Faith 249)

fill us with your love and compassion for all people.

Wash away all that is wrong in our lives,

remove all that is harmful from our attitudes.

Teach us not to put ourselves before doing the right thing.

Help us to be mindful of others.

Be with us in this time of trial

and help us to focus on your undying love for us all.

For your name’s sake.