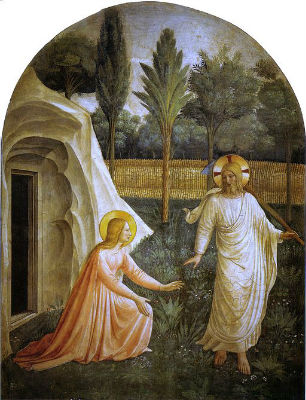 Loving God, your Spirit of love breaks through all barriers – nothing can defeat it, and nothing can hold or contain it.

We thank you for raising Jesus – for showing that the tomb is empty. We thank you that his followers needed only to open their eyes to see him – in grief, in danger, alongside them on the road, and with them in their daily tasks.

We praise you that Jesus is alive and here alongside us, his followers of today.

Bless all those in difficulties at this time – those who are sick, and those who grieve.

Be with those on the front-line – NHS staff and key workers, working to the limits of their strength.

Bless those throughout the world whose lives and livelihoods have been damaged by all that has happened.

Make us aware of the needs of the poorest and most fragile, even in our own time of concern.

Bless our friends and families and keep them safe and hopeful.

One thing I really treasure about the Christian faith is that we believe in an empty tomb.

Earlier this year I was talking to one of our church members who had been to see the Tutankhamun exhibition at the Saatchi Gallery and said how brilliant it was.  I remembered going from school to see the original Tutankhamun exhibition in London and seeing the iconic golden mask, which I understand is now too fragile to show - and this conversation reminded me that I had put this exhibition on my bucket list of things to do, and prompted me to go.

The exquisite workmanship on the models, jewellery and goods to go in the tomb was phenomenal – these were beautiful artefacts of tremendous value and left you open mouthed in wonder.

Whenever I catch the train to Sutton I am reminded of an exhibition of the Chinese Terracotta warriors that happened at the British Museum. When you are drawing into Sutton station there is a fairly substantial model of one of terracotta warriors standing by one of the huts.  The original terracotta figures were all prepared for a tomb to be a life-sized army for the emperor in the afterlife and all were made and fired with individual faces/hair/pieces to their armour.  What an army of artists originally prepared them.

We had a holiday a couple of years’ back and stayed in the National Trust house at Sutton Hoo, where a boat with beautiful treasures and a fantastic helmet was the burial place of what was thought to be a king of the region.  The hoard found is in the British Museum - but before ever it reached there it was kept for a while under a bed in what became our holiday sitting room!

How immensely fascinating it is to gaze at the treasures from tombs of important people.  To be privileged to see such things in museums and galleries is a fantastic and memorable experience.  But what is it all about?  The tombs of emperors and pharaohs and kings used to be filled to overflowing with jewels and riches and all it was imagined they would need for the afterlife.  We see that in many different traditions the goods or armies you had were the ‘be all and the end all’ of death – and people believed they would keep them sustained after death.  The tombs then had to be sealed and protected, and as we know lay undisturbed for many centuries with these vast treasures unused and unseen.  One wonders how many of the ordinary folk of these times were starving while the tombs were filled with the richest things!

In marked contrast to the desire to have every wonderful thing and be cosseted and protected and preserved from one’s enemies after death, the Christian faith has none of this.

Our faith is in an empty tomb – the guards fall down, the stone is rolled away – and all that is in it are grave-clothes and the napkin folded round the head.  Though Jesus is buried in a rich man’s tomb, and his body treated with spices – the practicalities of burial in a hot country – the tomb is only a tomb, it is not filled with anything of value to look on or be preserved.

There is no need for any protection or elaborate plans around a tomb at all – for the Christian faith is about relationship.  A relationship with God that is set out in the Hebrew Scriptures:

There is nothing of any value to look on or to be preserved, because it is the treasure of the relationship with God that matters.  Jesus was held in that relationship on the cross, and the presence of God did not desert him then and was with him in the tomb - if I make my bed in the depths, you are there.

We now have no need for preservation or a tradition of the tomb, no need to discover it, no need to marvel at it, because our engagement is not with the trappings or the tomb, but with a Living Lord.  Those who first went into it found it was empty apart from grave-clothes which were no longer needed.

Mary Magdalene went to the tomb and saw that the stone had been removed from the entrance.

So Peter and the other disciple started for the tomb. Both were running, but the other disciple outran Peter and reached the tomb first.  He bent over and looked in at the strips of linen lying there but did not go in.  Then Simon Peter came along behind him and went straight into the tomb. He saw the strips of linen lying there, as well as the cloth that had been wrapped around Jesus’ head. The cloth was still lying in its place, separate from the linen. Finally the other disciple, who reached the tomb first, also went inside. He saw and believed.

So, because they saw it was open and empty we no longer need the tomb.

John’s gospel is well-loved, and reminds us that the resurrection is about relationship.  The recognition of the Risen Jesus is about acknowledgement and engaging person to person: ‘Jesus said to her, ‘Mary’.  She turned towards him and cried out in Aramaic, ‘Rabboni!’ (which means Teacher).’

Then he said to Thomas, put your finger here; see my hands.  Stop doubting and believe.’

‘Early in the morning Jesus stood on the shore … Jesus said to them ‘Come and have breakfast.’  None of the disciples dared ask him ‘Who are you?’  They knew it was the Lord.

It is really Jesus – and in person.  The treasure we have is an empty tomb and the ability to have a relationship with Jesus.

These are the days in which we are finding out that what matters is people, and people connecting with each other.  This is the spirit of Easter.  It is not goods or riches, clung onto and held tight, that matter - it is the connections and relationships we have with each other that are the most important things of all.

This Easter let us discover an empty tomb and a living relationship with Jesus, and so with each other.

Christ is risen.  He is risen indeed.  Hallelujah!